It’s been about two weeks since the #GymsharkLDN pop-up store event in London and I am still buzzing from the energy and excitement I felt that day! 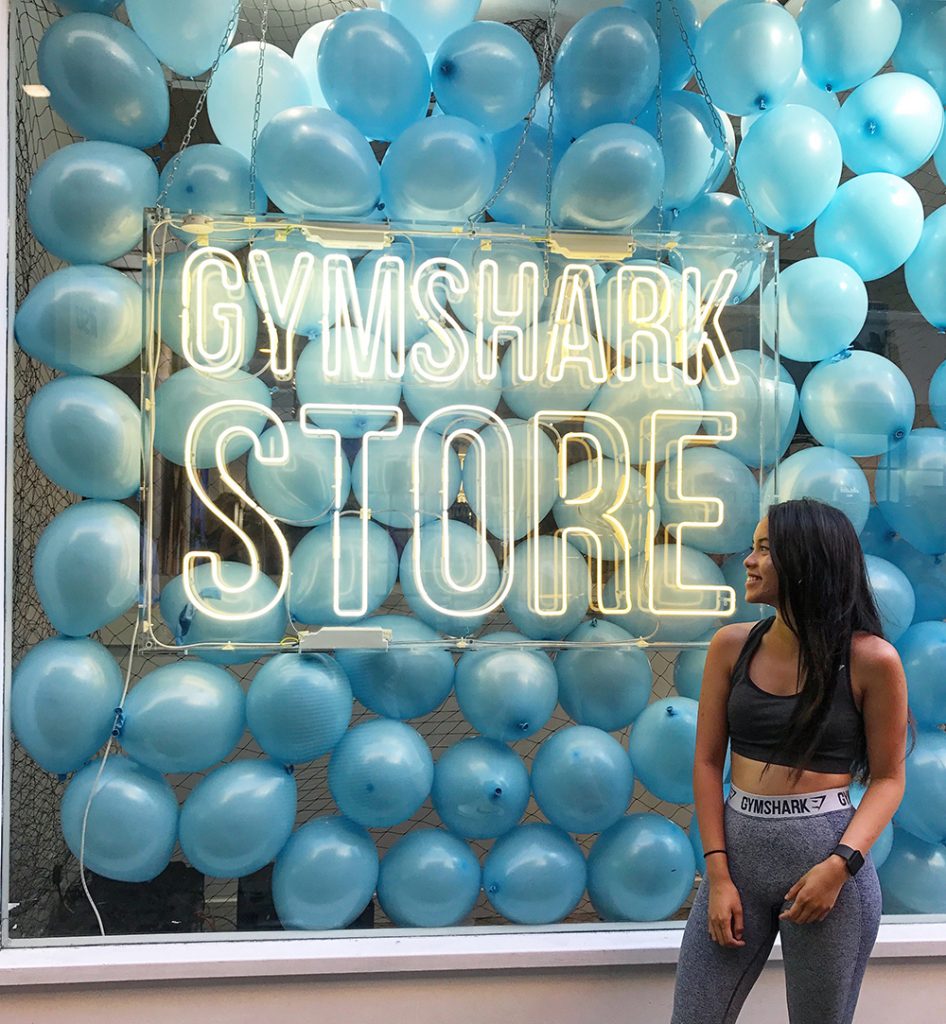 I went down to London on the second Friday of this month to visit Hamdah who is now interning in the big city over summer! I may start sounding like a broken record now but I am so proud of her achievements this year, she has worked incredibly hard to secure a placement and last year I was in the same boat, struggling to secure one so I know how it feels! Well done once again Hamdah, you’re amazing.

With Hamdah interning in London, I had an excuse to go down a bit more. Conveniently, Gymshark had just announced that to celebrate their 5th year anniversary, they were going to open up a pop-up shop in London the weekend I had planned to meet Hamdah.

For those who don’t know Gymshark is a clothing brand that I have not stopped raving on about since January this year. When I first started working out, I used to just purchase cheap gym clothing that would rip after a few uses or would be completely transparent. Ugh. So I decided to invest in much more quality clothing, it started with Victoria Secret PINK Sports Bras and leggings but I noticed that this was a hit and miss.

I then discovered Gymshark, I went for the plunge and now you all know that I am clearly obsessed. That quality though.

I have since then just been buying from them (when I can – they sell out very quickly!) and became a fan of not only their clothes but the athletes who modelled their clothes. My favourite YouTuber, Whitney Simmons, became an athlete for them around the same time I became obsessed with their clothing line – so this only heightened my love for them.

When I heard that they were in London, I knew I just had to go.

I was really excited that morning and got ready at 5 am even though Hamdah had told me millions of times the night before that we were only 20 minutes away on the tube from Covent Gardens. I was just too hyped! We ended up getting there at around 8 am where we lined up for 3 hours (the shop opened at 10 am). Haha, dedication right? But I’m so glad we did though, the lines become so long (I think it went down 2-3 blocks by 10 am)

Whilst we were waiting, we got talking to some girls in the que – Molly, Rachael and Vicky. It was SO refreshing to talk about workouts, protein, shakes and routines to people WHO UNDERSTAND this lifestyle. Usually when I talk to people who aren’t about that life (or into it as I am), I get strange looks and comments like “wow, that’s insane?!” “Why do you try so hard?” “Ew, a protein bowl sounds awful.”

BUT THESE GALS GOT IT. 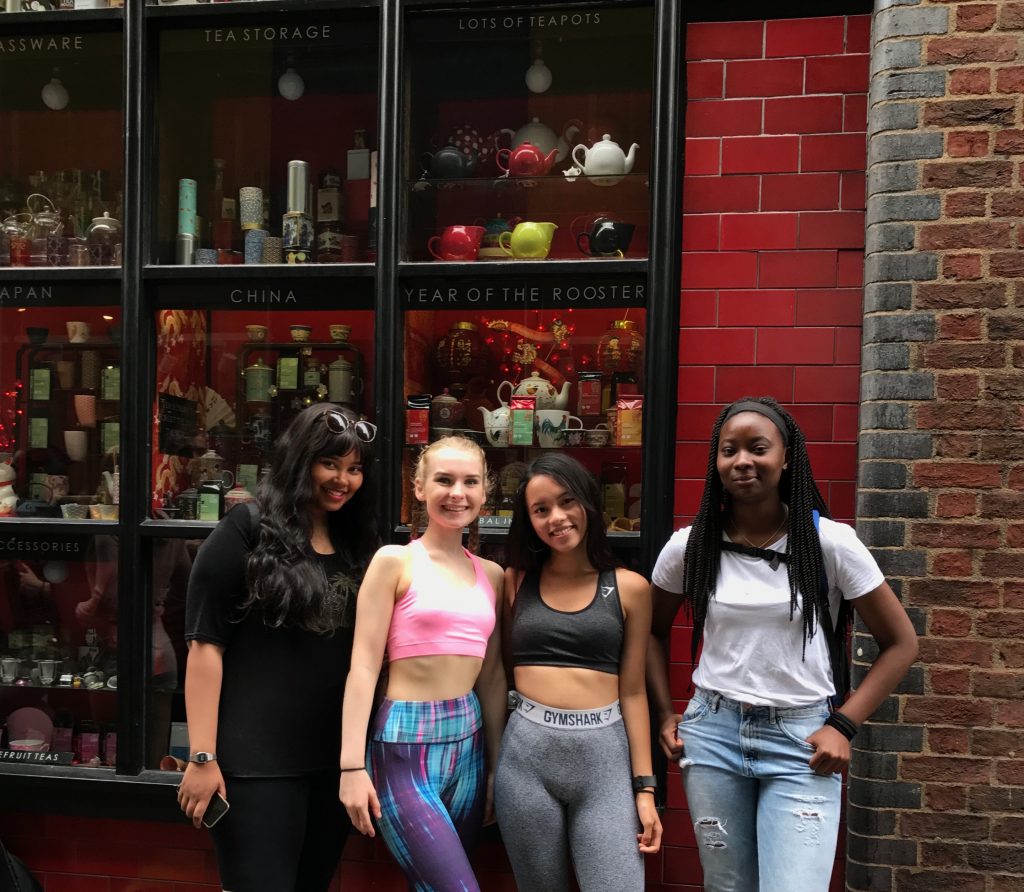 They definitley motivated me to go to more fitness-related events in the future! It actually surprised me how easy it was to talk to everyone. Initally, I thought I wouldn’t fit in at all BUT GUYS THIS IS WHERE I’M MOST COMFORTABLE 😆

When we finally managed to get in, I quickly went straight for a set I had my eyes on for a while now. They were the beet seamless top and leggings – they looked and felt amazing 😍 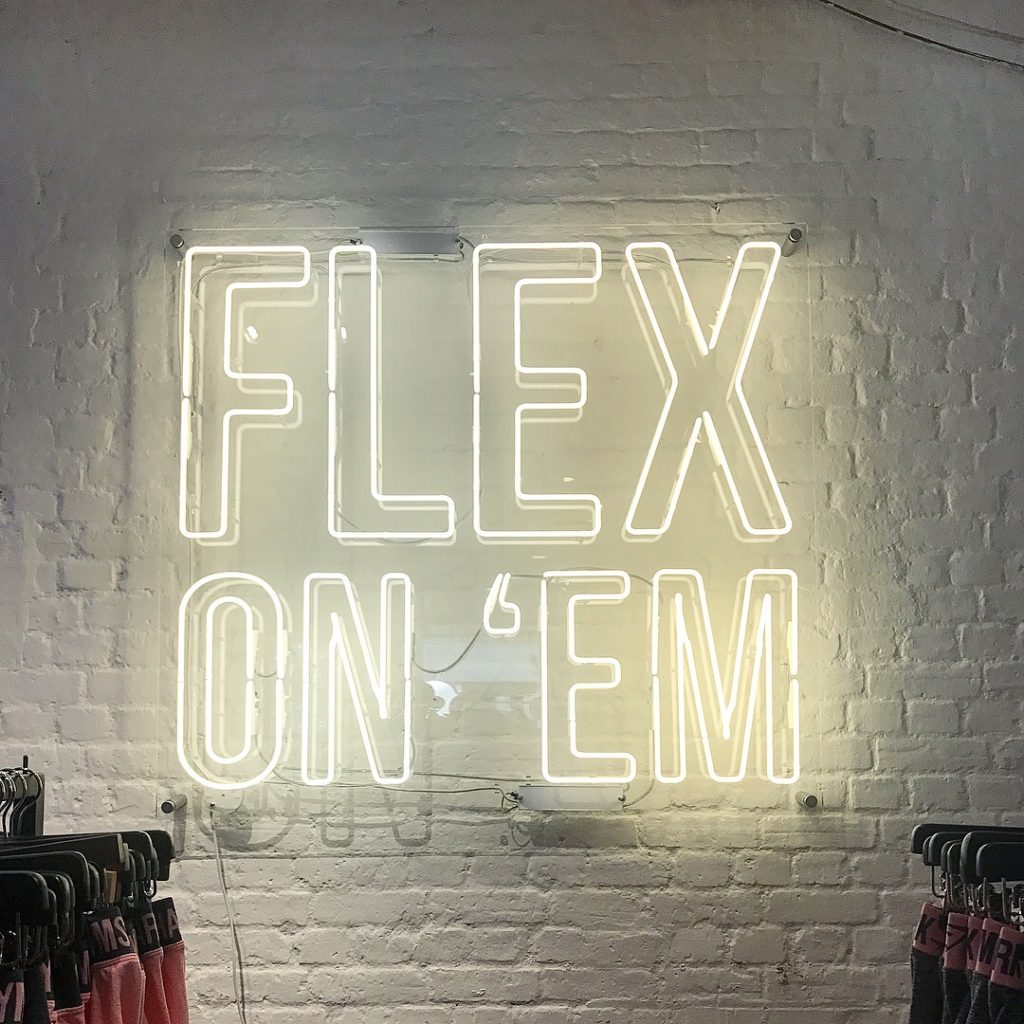 After purchasing the set, Hamdah and I made our way towards the room where you could meet the athetes. As soon as I saw Whitney I actually wanted to turn back and not go in to meet her (aggressive anxiety LOL) but Hamdah (being the awesome gal she is) really pushed me. “You came all the way here and you’re not going to talk to her”

SHE WAS SO RIGHT, I’m so glad I plucked up the courage to talk to Whit because she WAS PHENOMENAL. I talked to her about how much she pulled me out of a bad time in my life (when I allowed some guy to walk all over me and screw me over) from her  YouTube videos (I didn’t feel so alone 😊) 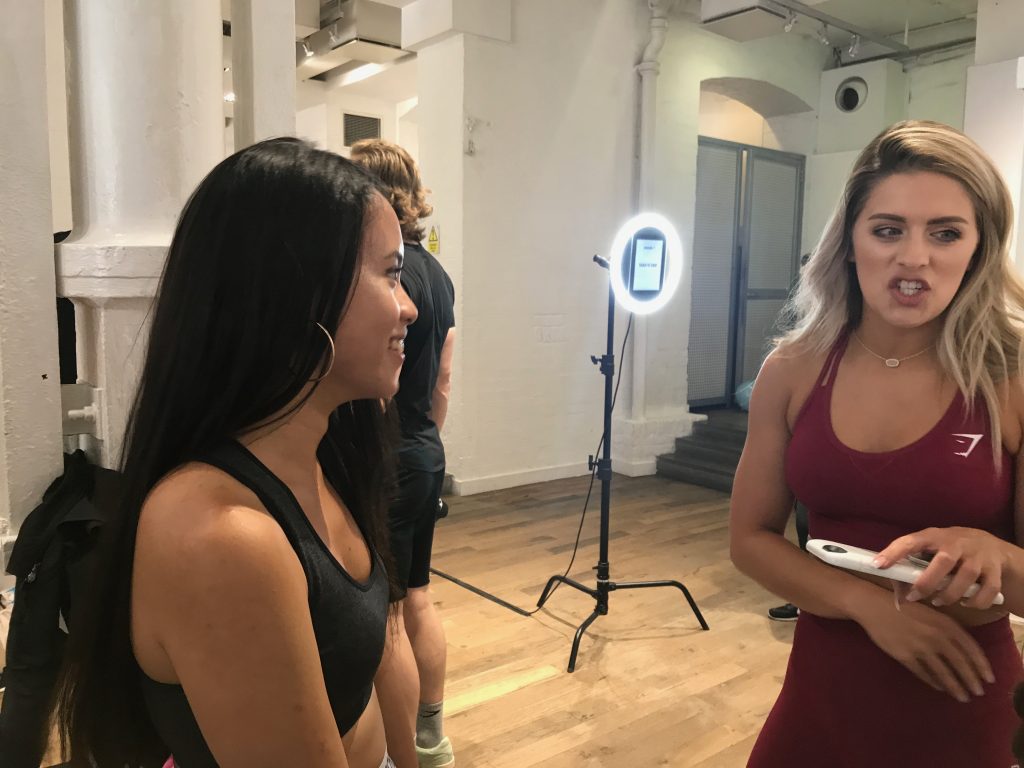 I can confirm she was just as awesome IRL as she is online. 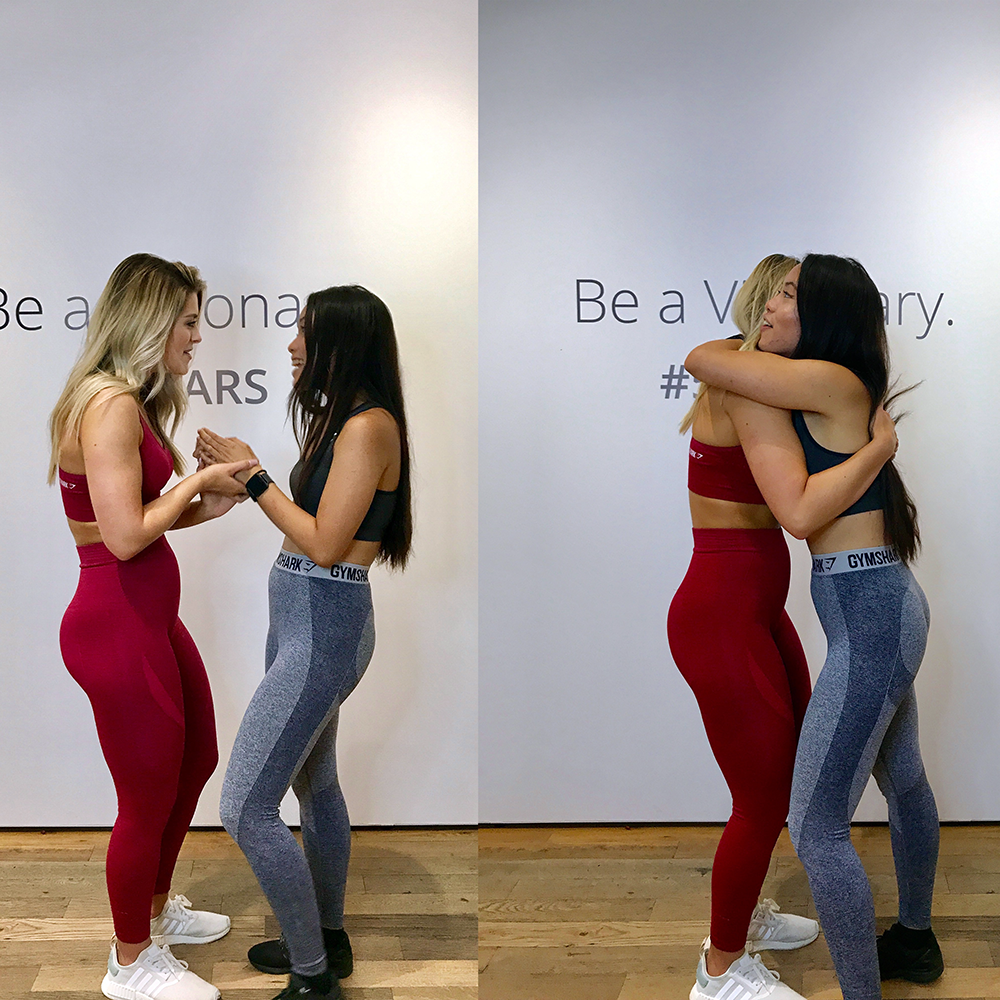 Still on a high, p2 – Super glad to finally meet the *phenomenal* @whitneyysimmons 💖 I was SO hyped/happy/emotional 😆 @Gymshark #gymsharkLDN pic.twitter.com/A1suXIvhCw

Carly tweeted at me earlier in the day and said that she couldn’t make it, I knew how much of a fan of Gymshark and the athetes she is so I kindly asked Grace and Nikki to do a little shout-out video for her. We LOVE you Carly 😍

A big thank you to Grace and Nikki for doing this for her – it means a lot to both of us! 😄

I came back to see @gracefituk & told her as promised 😉 @xcarlyboo I love you so much, I wish you were here; I hope this makes up for it 💖 pic.twitter.com/J61aXGc32u

I went back to the pop-up store again in the afternoon after meeting a few friends. When I was waiting for a friend at Cafe Nero, I started to get talking to a guy (Ben) who was wearing Gymshark (IT BRINGS PEOPLE TOGETHER, I SWEAR) It was fun to get to know him and talk about all thing fitness things ~

We got talking, we have similar interests (obv) and he even complimented my #gainz. Took a selfie and now he’s invited me to workout sesh. pic.twitter.com/R2UTmB2ODn

It was such a fun weekend – I bought awesome new gym clothes, met my fitspos and met like-minded people! I left feeling more motivated and much more confident than ever, not only to workout and continue this healthy lifestyle but to attend more fitness-related events and meet more awesome people!  💪🏼

These gals tho ☝🏼👭👭❤ Turned up to the @gymshark event by myself and left with new friends – that is what i love about these meetups, its not just about meeting the influencers 🤗🙌🏽🙌🏽 #gymshark #beavisionary #meetup #fitfam #girlswholift #fitness

(I also met up with Chynna and Mutay for ice cream and Nandos, yeah, we’re basically sisters now. Also, shout out to Joe, David and Chin for hanging out!)